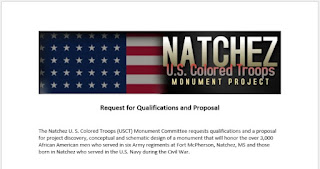 The committee recently announced the release of a Request for Qualifications and Proposal (RFQP) targeting qualified firms and individuals to work with the committee and local community for conceptual and schematic designs for the Natchez project. Deadline for submissions is 5 p.m., Friday, June 24, 2022.

"This monument will be a place of reverence, pride, and honor that will help to tell many untold stories about Natchez's past," said Committee Chairman Robert Pernell. “At the same, the monument will allow us to give these brave men the honor they deserve for their sacrifice.”
The Natchez USCT Monument Committee was established in 2021 by Natchez Mayor Dan Gibson as an independent organization. It envisions the monument as a tribute to the individual African American Army and Navy enlistees, according to Lance Harris, who chairs the Monument Design Subcommittee.

“The Natchez USCT soldiers and Navy servicemen deserve their history to be known, respected and honored,” he said in the RFQP document. “Up to this time, little if any of their history has been widely known or discussed.”

Harris noted the monument could also serve as a place of inspiration, learning, and connection to other USCT places of meaning in Natchez.

Since its formation, the committee has made notable progress, according to Pernell. In January, the committee launched its official Fundraising Kickoff for the Natchez USCT Monument Project. The fundraising campaign is led by Mayor Dan Gibson, who chairs the Finance and Fundraising Subcommittee.

After months of research, meetings, and input from the community, the committee selected The Natchez Bluff, at the corner of Madison and Broadway streets, as the official site for the monument. The location received unanimous support in March from the Natchez Board of Aldermen contingent upon approval of the Mississippi Department of Archives and History, and the Natchez Preservation Commission.

“We are now ready to release the RFQP seeking discovery, conceptual design and schematic design that will guide future phases of the project,” said Pernell. “We want to share this document with as many qualified prospects as possible. We’re asking the community to help us by sharing this document with any qualified individual or firm that might have an interest in this project.”

Proposals should be mailed to:

Opinion: Researching the Stories of Natchez 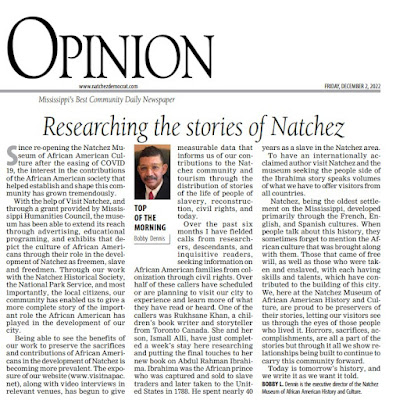